This week’s theme is based on those relatives who lived a long life aka Centenarians. Well I am happy to say that I had two female relatives who were Centenarians. In addition to living to the ripe old age of 102; they were both my father’s aunts: Ethel Artis and Leona Becton.  Something else they had in common was that they were the first born in their families and they outlived their siblings. A lot of times, it’s the youngest child who outlives everyone else in their families but these two ladies defy the odds.

Ethel Pearl Becton Artis
While these weekly posts are supposed to be dedicated to one ancestor, I could not see myself not including Aunt Ethel. Aunt Ethel was born in 1892 and she was my paternal grandmother’s (Minnie Becton Powell Coley) oldest sister who happened to be the first born of William and Phoebe Taylor Becton’s nine children.  Aunt Ethel married June Scott Artis in 1912; they had 3 children Amanda, James and Edgar Artis when she died she had 15 grandchildren, 36 great-grandchildren and 15 great-great-grandchildren. Aunt Ethel lived all her life in North Carolina until she passed in 1994.

Aunt Leona was the only one of her siblings who had children and to this day no one knows what became of her son James Ward whom she had by her first husband. There were two stories that I heard about James. The first was that he visited his mother in the late 1960s but no one knows what happened and why he never returned.  Another story was told by Aunt Leona to her caretaker, Ann. Ann asked her why she never had children and she told Ann; “I had a son and his name was James.” She said that when she moved to Washington that she left James in South Carolina with her sister but her sister could not “handle” James; so James came to live with Aunt Leona and Uncle George.  One day James told Aunt Leona that he was going out to meet some friends but he never returned home.  I believe that James suffered a terrible fate or he would had contacted his mother.

When Aunt Leona turned 100 her health began to decline.  Her last years were spent in a nursing facility where almost every weekend my mom and I would visit her.  Aunt Leona never wanted us to leave however, we always told her that we would return. Sadly, she always told us that “you just got here.” Once when she was hospitalized, she told me that she “Loved Her Bectons.” I told her that “we loved her too.” She died 8 days before her 103rd birthday; it was the date that she was buried on.

I believe that nobody wants to die but most of us don’t want to be the last to go. When you’re the last of your family or your generation or your friends, your lonely and that’s how I felt with Aunt Leona. She once mention that she did not know why she lived so long.


Posted by Howdidigetherefromafricatonc at 10:40 PM 5 comments: Links to this post

This is my latest post for the 2015 edition of the 52 Ancestors Blogging Challenge. If you’re not familiar with Amy Johnson Crow’s “52 Ancestors in 52 Weeks” challenge, check out her Blog at “No Story to Small.”
Like last year, the blogging challenge was about dedicating a post each week to a specific ancestor but a twist has been added to this year’s challenge: themes.  The theme for this week is “favorite photo” and my favorite photo is a picture of my maternal grandmother, Classie Virginia Pate Fuller (8/21/1901-9/2/1969).

My grandmother was born to John (1843-1903) and Sarah McCall Pate (1872-1909) in North Carolina. She was the youngest of 12 children.  She lived all her life in Wayne County, North Carolina. On November 16, 1920, she married Leslie Fuller and in 1925 she gave birth to her only child. Mafull (the name she was called by her grandchildren) departed this life in 1969.
Two thoughts comes to mind when I look at this picture. First, I always thought that this picture was taken when she was a teenager but her family doesn’t know what year it was taken or how old she was, nor do we know where it was taken or for what event. What I do know is that Mafull had this serious expression, in fact, an 8 ½ x 10 copy of this photo is kept in my mom’s bedroom and when my little nieces look at the photo; they say “she looks mean.” I told them that she looks serious!
Because she was not smiling, the second thing that comes to mind is that Mafull was sad or lonely. I believe that this picture was taken after her mother died.  Mafull lost her parents at a very young age. Her father died when she was 3 or 4 and her mother died when she was 9 or 10. Unfortunately, North Carolina did not begin recording death certificates until 1913 so there is no record of when her parents died. I just know when her mother died; she went to live with her brother, Roscoe and his wife.
Someone once told me that people back then didn’t like taking pictures because the camera might take away their soul. Maybe someone told Mafull this same story and she was afraid to smile. But perhaps someone told her that she had to take a picture and because she was young and obedient; she took this unemotional picture.
But the most interesting aspect of this photo is her beauty. Okay, I will admit that I’m biased and she is my grandmother but to me; she is pretty in this picture.  Her complexion appears fair but my family said that she was “reddish” looking. Seriously, I don’t know what that means except that her complexion wasn’t real light nor real dark. My mom, her only child, inherited her tiny noise and her small lips; however no one in the family inherited her green eyes. In the picture, you can’t tell that the color of her eyes are green or as my brothers say they were hazel (sometimes light brown and sometimes green). My brothers once said that Mafull’s eyes would light up the room at night.  Recently we reconnected with a long lost cousin who said that MaFull had the prettiest blue eyes. But if you ask my mom, she will argue that her “momma had grey eyes.”
Mafull once told my mom that she, Mafull, look like her mother, Sarah who was biracial; it’s possible that Sarah passed her eye color to her daughter. Sarah’s father was from County Clare Ireland so I can only assumed that is how Mafull inherited her beautiful eyes.
Her clothing tells me that perhaps its fall or wintertime when she posed for this picture. The black overcoat and white cap that’s pull down her head gives me the impression that it was cold and almost all of her hair is neatly tuck in the cap, except for the wisp of a bang which is why I also think that she’s a preteen in this picture. Mafull appears so innocent.
Recently, I was looking through a family album and I found 4 faded “tintype” photos. Included in this set of photos is another picture of Mafull but younger. In the “tintype”, Mafull is similarly dressed like the picture above. She’s wearing a gray color coat, a white cap and that same sad expression on her face however, this time she’s sitting down in a chair surrounded by 3 shadowy figures who appears to be females. Currently the photo is being restored.  Oh, how I wish these pictures were taken in color!
Well, my favorite picture sits on my mom’s dresser. I guess that’s a cool thing to see when you wake up in the morning; is your mother looking at you.  It’s funny how time changes our perceptions. I don’t know about my mom but when I was growing up; I had celebrities (Prince, R&B music group Switch and NY Yankees baseball legend Reggie Jackson) on my bedroom wall and they were who I wanted to see when I went to sleep and when I woke up in the morning.  But now that I’m older, I don’t mind seeing pictures of Mafull and other departed loves ones who I miss when I wake up in the morning.

Posted by Howdidigetherefromafricatonc at 7:31 PM 10 comments: Links to this post

90 Looks Beautiful On You! 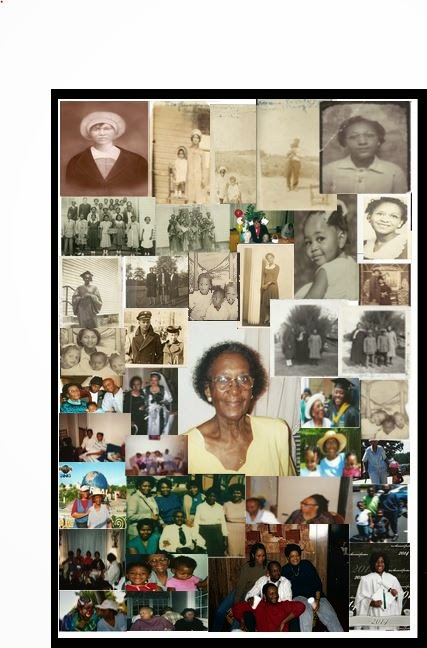 I’m happy to say that Amy Johnson Crow has decided to continue the 52 Ancestor Challenge. Last year, I only created 16 posts for this challenge. This year I hope to have 26 posts dedicated to the challenge. If you don’t know about it, Amy Johnson Crow’s blog, “No Story Too Small”, offered a challenge to genealogists to write a post once a week about one particular ancestor. Well, the challenge continues in 2015 with a twist or as Amy wrote, “a prompt.” The first week’s prompt is dedicated to “A Fresh Start.” For instance, which ancestor was given “A Fresh Start” or which ancestor you need to research over again. You know a “re-boot.”  This post is dedicated to those brick walls that I’m determined to break-through this year.

For instance, what happened to those Pate brothers, John, Robert and Wyatt. They were my maternal grandmother’s older brothers who were adults by the time my grandmother was born in 1901 but no living family member can explain what became of them. Did they marry and have children? Or did they suffer a horrible demise? Where did they lived after they left Wayne and Greene Counties, North Carolina?

Another mystery is whatever became of Grandma Mary Vick; actually she was my maternal Great-Great-Grandmother who left home when her daughter was a toddler and never returned.  What woman leaves her small child and never returns home?

How can I forget those family members who I find only on one census, for example, my maternal grandfather’s Great-Great-Great-Grandmother, Renah Daniels. My DNA cousin who goes by the username of “DabofSugar”contacted me on Ancestry.com and told me to look for Renah on the 1870 census and behold...there she is. Renah and her family was found on a page just before her daughter’s family, Olivia/Silvia Roundtree Newsome. Renah’s age is listed as 35 but if you look at the actual page its 55 and her name is spelled Rena. Sadly, I can’t find Rena/Renah or her children after this census. They all disappeared. I’m hoping that later on this year, I can provide an update on a few of my break walls.

I want to thank Amy again for this challenge because if it wasn’t for her; I would still be wondering “what am I going to do with all this information that I’ve collected on the ancestors.”